Two videos have been viewed hundreds of times after circulating in several Facebook posts that claim to show lifelike Chinese-made robot dancers performing at an event in Shanghai. However, the claim is false; both videos feature human dancers. One video shows Chinese acrobatic dancers while the other shows a ballet performance in China by students from a US-based dance school.

A video, which shows an acrobatic dance performance, was shared on Facebook here April 1, 2022.

Part of the Indonesian-language caption of the post translates to English as: “Beautiful Chinese dance broadcast from a park in Shanghai. They are not skilled dancers, but robots created by China.

“The show only lasts about five minutes, but the queue to buy a ticket takes four hours, and the ticket price is 499 yuan (one million rupees).”

The three-minute video has been viewed over a hundred times after it was also shared with similar claims elsewhere on Facebook. here, here and here.

Another video, which shows a group ballet performance, was shared on Facebook here July 10, 2020.

The three-minute, 53-second video has been viewed over 350 times.

The Indonesian-language caption of the post translates in part to English as: “This classical dance has just been created in China and performed at Shanghai Disneyland. It’s not dancers but robots made in China. The show only lasts about five minutes, but the queue for tickets takes four hours, and the price of a ticket is 499 yuan, which is equivalent to 1,000,500 rupees.” 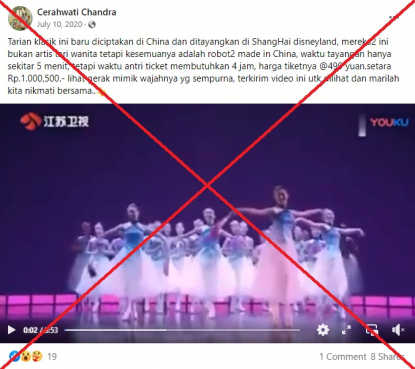 The footage has been viewed over 200 times after circulating alongside a similar claim between 2019 and 2022 on Facebook here, here and here.

However, the claims about both videos are false.

The video was uploaded by the account of a stunt tv show from Guangdong Radio and Televisiona state-controlled broadcaster in China Guangdong Province.

Part of the Chinese caption of the post translates to English as: “Liu Xiao, an 18-year-old girl from the Xi’an Zhanshi Zhanqi acrobatic troupe, soars through the air suspended by her hair, leaning only on a lock of her hair to perform a beautiful dance in the air.”

Below is a screenshot comparison of the video in the misleading post (left) and the genuine video on Weibo (right): 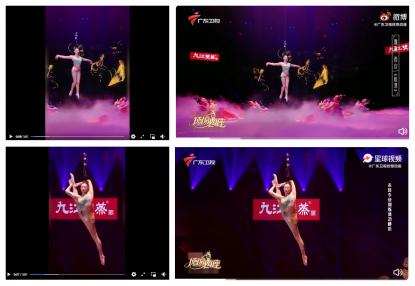 Another Liu performance has been released here by CCTV, the Chinese public television channel, on September 5, 2021.

Keyword searches found this video, uploaded to Youku, a Chinese video platform, on May 26, 2019.

The video was uploaded by the Jiangsu Broadcasting Corporationa state-controlled television and radio broadcaster in China Jiangsu Province.

It shows a performance on a television program broadcast by the Jiangsu Broadcasting Corporation, titled “Beyond the show“.

The Chinese title of the video translates to English as: “MorningStar Dance Academy Atlanta performs ‘folding fan ballet’, a Chinese-style ballet, which shows the beauty of China.”

Atlanta MorningStar Dance Academy is a dance school based in Atlantain the US state of Georgia.

Below is a screenshot comparison of the video in the misleading post (left) and the genuine video on Youku (right): 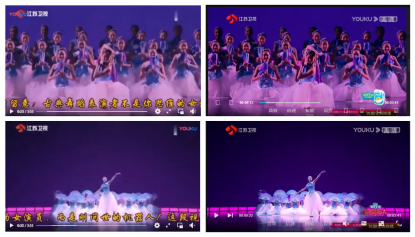 The Jiangsu Broadcasting Corporation also published articles here and here on the ballet show in May 2019.

Designer Sandhya Raman on her journey of costumes for dance performances, design innovations for a digital stage – Art-and-culture News, Firstpost

According to Raman, costume is a study of heritage, space and time, events that take place nationally, globally and politically, which are emulsified into a design that can hold an audience in its grip. “The costumes start their performance before the dancers even set foot on stage, because they say everything about the show,” remarks […]

9 dance shows to see in New York this weekend

NEW YORK CITY BALLET at the David H. Koch Theater (until June 2). For the first time, the work of City Ballet’s founding choreographer, George Balanchine, and that of its current resident choreographer, Justin Peck, are on the program together (Friday, Tuesday and Thursday), cementing Peck’s status as heir presumptive and shaper of modern corporate […]

Best comedy, drama and dance shows to watch in 2021