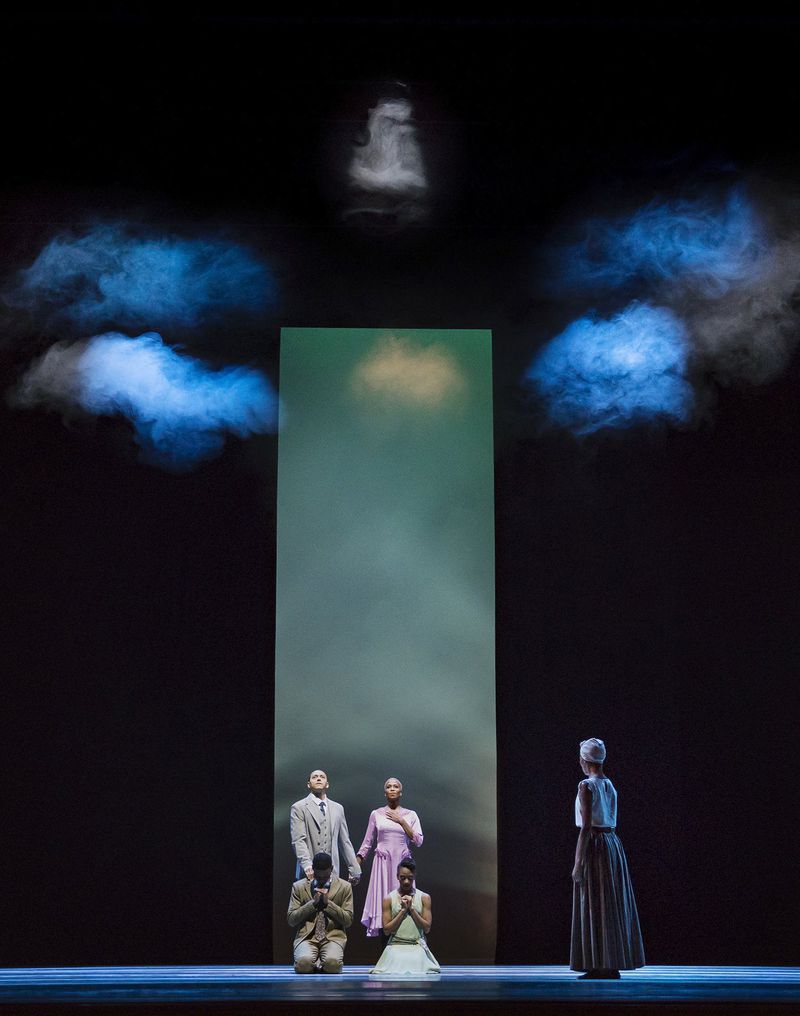 Rhoden and Byrd’s works touch on different aspects of African American culture and history, and they take on different tones, and rightly so. “Greenwood” is filled with rage and grief as it brings to life a historic tale of racial violence. “Sunrise Divine” conveys joy and hope while reveling in spirituality and unity. Ultimately, however, the two pieces share more in common than meets the eye.

Byrd, a Tony Award-nominated choreographer and pioneer of contemporary ballet, has built a reputation with contemporary dance works that explore complex societal issues. In recent years, he has turned to the Jim Crow era of the South – histories of racially motivated violence that have been all but buried by the institutions built to uphold justice and law. He thinks it’s the role of the artist to shine a light on the dark sides of American history so we can start talking about reconciliation.

He first heard about the Tulsa Race Massacre when his company was on tour in Tulsa about seven years ago. Last year, when Byrd was creating “Strange Fruit,” a work about lynching, the incident came to mind. Around the same time, Ailey’s art director Robert Battle approached Byrd about creating new work. The timing to explore the events that transpired in the thriving black community of Greenwood seemed right.

In 1921, racial tensions were about to erupt in the Tulsa oil boom. The isolated African-American community around Greenwood Avenue had become a nationally recognized business district nicknamed Black Wall Street. Many whites resented the prosperity of Greenwood, which undermined the false assumptions upon which Jim Crow laws were based.

The details of what happened between Sarah Page, a teenage white elevator operator, and Dick Rowland, a young black shoe shiner, are unclear. Some believe Rowland tripped and stepped on Page’s foot. Others say the two were romantically intimate. Still others believe Rowland assaulted Page. Whatever happened, this prompted Page to scream, which set off a chain reaction that led to a rampage of looting, arson, and murder throughout the Greenwood district. Within 48 hours Greenwood was reduced to ashes, approximately 300 people died and 10,000 people were left homeless.

In his interpretation of events, Byrd uses a nonlinear narrative that moves back and forth in time. It shows all three versions of what might have happened between Page and Rowland, but the characters are slightly abstract, their emotions magnified to make them universal. A set of silver-clad figures representing the “white psyche” embodies envy, hatred, and a collective impulse to destroy the black neighborhood. An African-American family symbolizes the community under attack. Audiences see the incident through the eyes of a female character that Byrd picked up from his production of “Strange Fruit.”

Field recordings of African-American religious songs “My Soul is a Witness” and “Move Members Move” combine with newly composed music by Emmanuel Witzhum and Craig Tattersall to underscore the onstage drama.

The piece premiered to a stunned audience last December at New York City Center. It’s hard to predict how Atlantans will react, but when Byrd spoke about it during a panel last month at the National Center for Civil and Human Rights, the expressions on the faces of African Americans in the audience spoke of pain and outrage, while white public members showed extreme unease.

While “Greenwood” offers little in the way of dealing with the collective memories it draws on, Byrd hopes to evoke a sense of compassion and understanding. “To move forward,” he said, “we must acknowledge the past.”

It’s no coincidence that both productions debut during Black History Month, but it’s worth noting that the Alvin Ailey Company, rooted in African-American culture, chose to explore a painful piece of buried history, while Atlanta Ballet, a company with just three African-American dancers on its roster, sought to celebrate the unity and universality of gospel music in its premiere of “Sunrise Divine.”

Rhoden, the choreographer of “Sunrise Divine,” is a former member of the Alvin Ailey American Dance Theater who co-founded the New York-based Complexions Contemporary Ballet, founded on a philosophy of diversity and multiculturalism.

He created the new ballet in collaboration with Kevin Johnson, composer and director of the Spelman College Glee Club, who will perform alongside the Golden Gate Singers and soloists including Lydia Pace. 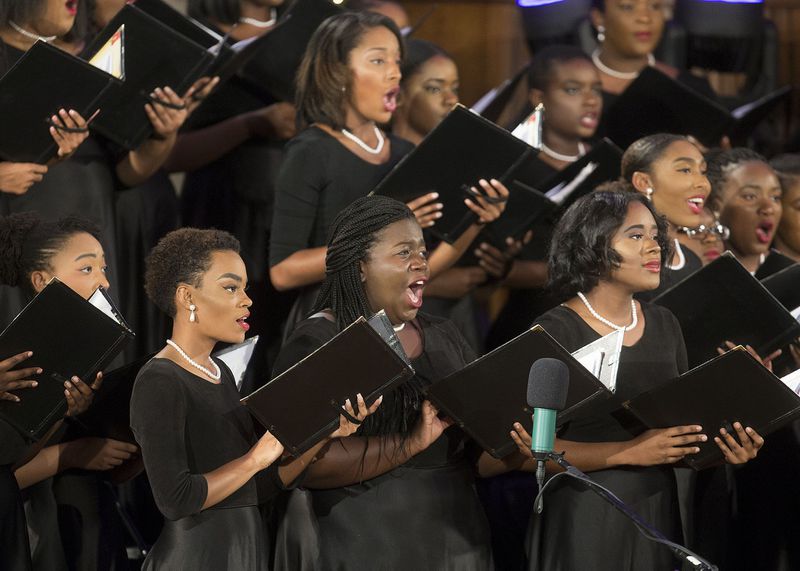 The production grew out of Atlanta Ballet’s initiative to attract new audiences, collaborate with Atlanta-based artists and commission work from choreographers of color, said Gennadi Nedvigin, artistic director of Atlanta Ballet. Rhoden also has the international profile that Nedvigin sought and a style that builds on the classical foundation of Atlanta Ballet dancers and extends their artistry.

The idea of ​​collaborating with a gospel composer appealed to Rhoden, in part because he simply loved music and had frequently danced to gospel music as a member of the Ailey Company.

Johnson has compiled a score of new and traditional pieces that cover the evolution of gospel music and complement Rhoden’s vision of bringing people together in hope, faith, love and unity. The piece begins and ends with original compositions, transitions to Jubilee music, and then to spirituals such as “Deep River” and “Steal Away.” From these quiet moments, the sound shifts to Walter Hawkins’ “When the Battle Is Over” and finally bursts into “Hallelujah.”

Rather than literally interpreting the lyrics of the song, Rhoden let the rhythmic undercurrents of the music drive a movement that expresses qualities of faith, strength, tenacity and the ability to reinvent oneself – all aspects of African-American spirit, Rhoden said. But the universal message is love.

“Sunrise Divine” is a departure for the Atlanta Ballet, which hasn’t commissioned many works set to African-American music. Lauri Stallings’ 2008 “Big” with Big Boi Patten and Geoffrey Holder’s 2003 “Transcendence” with the New Birth Missionary Baptist Church Choir of Atlanta are exceptions. Conveying the essences of black culture through predominantly white, Asian or Latino dancers trained in a European aesthetic proved difficult for the company. Performing gospel music came easily to the black dancers in the production, Rhoden said, but the majority of the dancers had a long way to go.

“My job was to take who and what they are and merge them with who and what I am,” Rhoden said. “It was about trying to find that place in the middle where we can all meet and have that experience.”

The work begins with an affirmation of faith and ends with a celebration. When asked to identify the tension in the piece, Rhoden said it was “in the movement and the grain in the spirituals. By the time we hit ‘Steal Away’, we showed this feeling that sometimes there is struggle, but where there is struggle, there is strength.

Ultimately, the message of “Sunrise Divine” is celebration. “I think we’re always going to struggle with our demons to find a way to understand each other when we’re different,” Rhoden said. “When all is said and done, we are all fighting for the same thing, which is love and understanding.”

While “Greenwood” and “Sunrise Divine” take very different paths through history, both works aim to inspire compassion and understanding while speaking to the power and resilience of African Americans. Like Ailey’s “Revelations” and the sacred music common to all these dances, the artists aim for that particular alchemy that transforms painful experiences into universally relevant works of enduring beauty.

Photo courtesy of Shutterstock Subscribe to our amNY Sports e-Newsletter to get news and match coverage for your favorite teams Residents of Jackson Heights will be treated to a wide range of music as part of the Summer Sundays in the Park music series that kicks off July 3. Now in its […]

An integral part of St. Louis lore, the story of the Lemp family – a brewing dynasty that was beset by multiple suicides and left behind a reputedly haunted mansion – proved to be a fertile source for the Big Muddy Dance Company. “Lemp Legends,” which debuted two years ago at the Edison Theater, is […]